We head into Sunday at the Bermuda with Doc Redman holding a one-shot lead over the field, with Wyndham Clark and Ryan Armour hot on his tail.

Saturday was not the best day for us betting-wise though with Luke Donald slipping down to T15 after posting an even-par 71.

Now it's time for the final round and we're going to jump back into the matchup parlays that won big for us on Friday.

🏌️‍♂️ Round 4:
Picks and Plays

Another day, another chance to hit a big parlay on DraftKings this time thanks to their group matchup markets. If you're not sure of the benefits of these matchup parlays, check out this ridiculous win a bettor had a couple of weeks ago!

Day two was unreal for us with this market and we're back into it after taking a day off yesterday.

An absolutely HUGE day yesterday (see below) saw us cash in big time on a matchups parlay and after that win we're taking a day off from that market and instead going with an outright winner.

Our Hail Mary pick of Luke Donald made his up to T6 yesterday and will see this as a huge chance to secure his first dub in a decade.

PICK: Despite being just three shots off the lead, the former world number one is still at 50/1, making him our play for Saturday!

🏌️‍♂️ Round 2:
Picks and Plays

Another day, another chance to hit a big parlay on DraftKings this time thanks to their group matchup markets. If you're not sure of the benefits of these matchup parlays, check out this ridiculous win a bettor had a couple of weeks ago!

Day one was disappointing (see below) in this regard, with two of our picks squaring level and two more losing, but we're feeling it today and ready to hit 5/5. 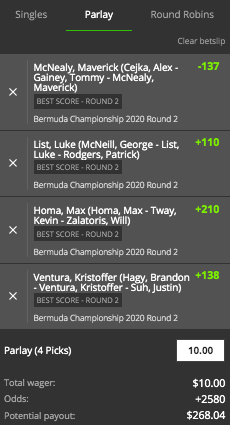 🏌️‍♂️ Round 1:
Picks and Plays

Another tournament, another chance to hit a big parlay on DraftKings thanks to their head-to-head matchup markets. If you're not sure of the benefits of these matchup parlays, check out this ridiculous win a bettor had a couple of weeks ago!

As I said above, this field is a fair bit weaker than in previous weeks but that doesn't mean there isn't value out there for us, including two of our outright winner picks who we are confident get off to strong starts on Thursday.

The defending champion of the tournament and the best bet when it comes to the list of favorites. Brendon Todd finished 20th in last season's FedEx Cup and is definitely the most consistent golfer in this field.

I personally feel as though he should be the favorite here and am happy to take the 14/1 in a week where he is the only top-50 player in the Official World Golf Rankings.

If you also like Todd this week but feel like one of his fellow Amerians could steal the show, then your best bet has to be this offer from PointsBet where if ANY American wins, so do you! At -200, this is the perfect saver bet to go alongside a Brendon Todd outright play and with PointsBet boosting it to -200, it's basically a no-brainer. Join here and get $100 in free bets when you deposit $50! 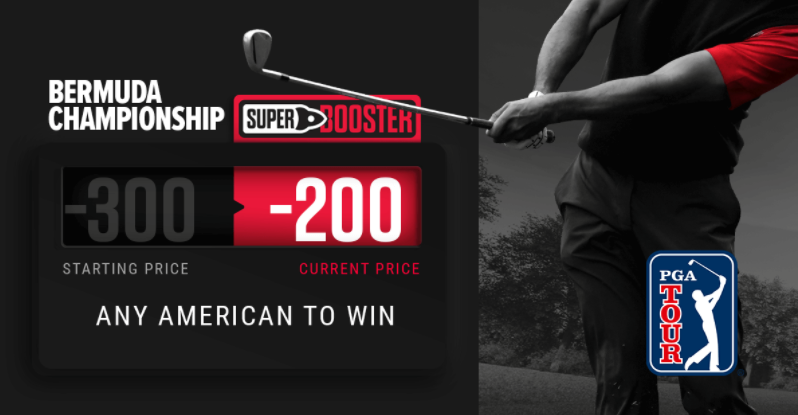 Kristoffer Ventura featured as the Hail Mary pick for the Sanderson Farms about a month ago and came through for a huge T6 finish after starting the week at 80/1.

The field this week is arguably of a similar strength to that of the Sanderson and the young Norwegian will likely be eyeing this off as an opportunity for another high finish and possibly even his first PGA win.

Keen to tail this pick? Check out the best sportsbooks in your state here.

Yes, you're reading that right. I've gone a 400/1 shot as the Hail Mary but there's some logic behind it (well, kind of).

Basically, with such a diluted field, I don't think there's enough value in the guys sitting around 90/1 as they would usually be a loooot longer than that any other week.

But Luke Donald is a former world number one and despite having not won on the Tour for almost a decade, he proved he can still cut it with the best earlier this year with a T11 finish at the Honda Classic in what was a MUCH stronger field than we have here.

As you can see, our Hail Mary picks have been pumping out great results, and should always be played for top-20 (Donald is 12/1) and top-10 (33/1) finishes as well as sprinkling some pizza money on them to win outright!