As we've said before, if you can bet on it, us Dimers WILL bet on it. Now, remember that point of the year when every sport was off except for one crazy game from Australia? Well after experiencing their own COVID-induced break, the Aussie Football League has been up and running for the past few months and their Grand Final is this week! Crikey!

Unfortunately, the one team with an American in it was knocked out two weeks ago, but if you find yourself up late on Friday night, this one is definitely worth a watch to kick off your weekend.

Richmond Tigers - The Tigers are the reigning champs and are going for their third Premiership (championship) in four years.

Geelong Cats - The Cats are one of the most consistent teams in the AFL, having made the finals (playoffs) 15 of the last 17 years, but are going for their first Premiership since 2011.

As with most ball sports, you can bet on the moneyline, spread, total points and much more with Australian Rules Football. As well as these usual markets, this game also has a Finals MVP-style award (Norm Smith Medal) given to the best player in the game. Yes, the medal for MVP in the season decider is named after a dude named 'Norm' - how Aussie is that!

There’s not a whole lot of value out there for either team at the ML or the spread, so we’re going to focus on the above-mentioned Norm Smith Medal market, which is available on DraftKings (guide below).

Martin and Dangerfield (no relation to Rodney) are two of the premium players in the competition, think Kawhi and AD, Mahomes and Wilson. They’re that BIG.

Martin is the short favorite, having taken out this award in both of Richmond’s recent Grand Final wins, whereas Dangerfield is set to play in his first Grand Final, having won plenty of other individual awards throughout his 300-game career.

If you were thinking of betting either team at the moneyline, a better play would be to pick one of these two to win the Norm Smith Medal - as a win for either of their teams would put them in prime position to win the MVP.

Two players who have taken their games to another level in 2020 and will be vital for their respective teams’ chances of winning the game. If you’re looking for value in a midfield player, then you could definitely do worse than these two guys who have the potential to win this one at odds of around +2000 (20/1).

Two very different players to each other but again two guys that will play big roles if their teams are to lift the Premiership Cup at the end of the game.

Toby Nankervis is the ruckman for Richmond, meaning he’s the tallest guy on the team and competes in dozens of jump balls throughout the game.

Brandon Parfitt is one of a host of players that will rotate through the Geelong midfield and is exciting to watch, playing with skill and hitting guys hard with tackles all game.

- Choose the players you want to bet on 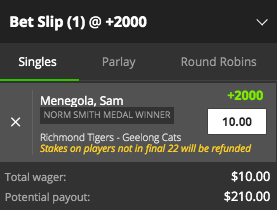