If Field of Dreams was filmed in 2019, it might be Ray Liotta drinking a beer in the rolling hills of State College asking a frat guy in a Saquon Barkley jersey if “this is heaven”.

I don’t know if there is a better or more iconic setting for college football than Happy Valley at night for the annual White Out. 110,000 plus fans, tailgating from the time they’re allowed to park and gather, all packed into Beaver Stadium to wear white and scream in unison for their Nittany Lions.

It’s truly a sight to see, and a bucket-list item for any hardcore sports fanatic. Unfortunately for No. 18 Penn State, College Football, and the world, this White Out is going to be different. Most notably 110,000+ fans will be missing, as well as a small city's worth of enthusiasm. Also missing will be the home field advantage, and the variation granted while hosting some of the Big Ten's best teams. Inside of a football insulated vacuum, less surprises are possible, and No. 3 Ohio State -12 looks darn good.

Ohio State and quarterback Justin Fields are strolling into a sterile environment, to flex its muscles to the nation, and remain in the College Football Playoff picture. A week after dismantling Nebraska and covering the 26-point spread without too much angst, the most talented team in the conference is playing a team that just lost in excruciating fashion to Indiana. And without a horde of fans to swing the certain momentum shifts, the Buckeye dominance can follow the 1st law of Newtonian Physics. An object in motion will remain in motion unless acted upon by an unbalanced force, of which Penn State can’t muster with its roster alone.

DraftKings are offering ridiculous 100/1 odds at the moneyline for this game, meaning you can bet $1 and win $100! Our computer has Ohio State as a massive 75% chance of winning this so that's where out dollar is going. Sign up to DraftKings here.

As Matt Tamanini from Land-Grant Holy Land said on the House Edge Podcast this past week, he thinks this spread should be closer to 17 or more, and Justin Fields has a good chance at four touchdowns or more. This isn’t a game that’s going to be played in the teens, or even the 20’s, and only Ohio State is capable of putting 40+ on the board. The Buckeye weapons are plentiful at every position. Dream recruits get to watch from the sideline until their number is called (seriously, watch youtube highlights of Mookie Cooper), and the man at the helm of the attack is a serious Heisman candidate.

On the flip side, Sean Clifford guides a Penn State attack without an explosive bone in its body. And his turnover or mistake prone resume suggests moving the ball consistency for long touchdown drives against this Ohio State defense isn’t going to be sustainable. Especially not if it’s asked with keeping pace with a Buckeye explosion.

Think Fields an Ohio are a sure thing? Place a min. $25, pre-game bet on Fields' in the Passing Yards Market and get $25 extra in FREE BETS for each TD he throws! Join PointsBet here. 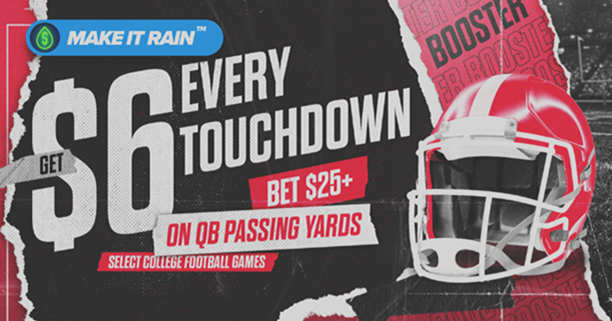