A huge moving yesterday with Russell Henley taking the lead after a 5-under 67.

Our picks are out of the running though with Cantlay having another off-day and Cam Smith still a bit behind after a poor Friday.

🏌️‍♂️ Round 4: Picks and Plays

We again came close to hitting the parlay with two of our guys not getting it done. Today we are tackling the SixShooter market. Rememeber these picks are just for Sunday's scores and the first three days are irrelevant.

We're going to put this parlay on with DraftKings and recommend you do the same, so we can sweat them together! Find out how to place a golf parlay here. 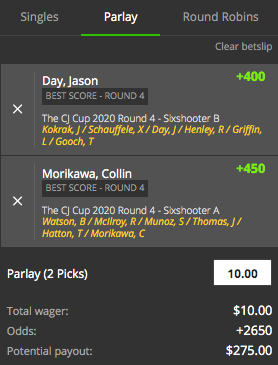 Preview and previous days picks below👇

🏌️‍♂️ Round 3: Picks and Plays

This is the one! Moving day. We're going to take on another 5-leg parlay here centered around today's scores only. We've got some big value in this card and are feeling good about cashing.

We're going to put this parlay on with DraftKings and recommend you do the same, so we can sweat them together! Find out how to place a golf parlay here.

🏌️‍♂️ Round 2: Picks and Plays

This week will throw some nice matchups for us all weekend with the lack of a cut, and today's are looking juicy.

We're going to parlay these picks up with DraftKings and recommend you do the same, so we can sweat them together! Find out how to place a golf parlay here.

As we did last week with Bryson, we're fading the favorite in this one. Dustin Johnson was the favorite here but having withdrawn due to COVID-19, the mantle was passed onto Spaniard Jon Rahm.

As with a lot of these top guys, Rahm's focus will be on next month's Masters and at just +900, he simply doesn't present enough value at the moneyline this week.

Speaking of the top guys, Brooks Koepka returns from injury this week and is available at a crazy +260 with PointsBet just to finish in the Top-10! Join now and receive $150 in free bets after your first $50 deposit!

Many people had Cantlay as their top pick last week at Shriners and he was looking like a serious chance for most of the week before collapsing on the final day with a 2-over 73.

RELATED: How to place a golf matchups parlay

Although he struggled on the Sunday, he was in unbelievable touch for most of the tournament and that form is too hard to ignore. He will be out to rectify his poor finish and as one of the few top-ranked golfers with some recent competitive reps under his belt, he should be ready to go.

Keen to tail this pick? Check out the best sportsbooks in your state here.

Our last two Hail Mary picks have been extremely solid with Kristoffer Ventura finishing T6 a couple of weeks ago before Harold Varner III was right in the mix at Shriners before finishing T13.

This week we've gone with Australian Cameron Smith, again at 90/1. With the near success of our last two picks, we suggest taking Smith to finish Top-10 at 14/1, while throwing a few bucks at him to win outright too.

The 27 year-old struggled upon his return to golf in June but is now on a run of eight-straight cuts made and is primed to make a push for his third PGA Tour win and second of the calendar year, after he won the Sony Open back in January.

🏌️‍♂️ Round 1: Picks and Plays

A smaller field this week, but it's packed with some of the best players in the world. This makes for some exciting head-to-head matchups being put together by DraftKings of which we're going to dive into and try and hit a parlay with! Remember these plays are for their Thursday scores only, so head back here each day for more!