It's time for Moving Day at the Mayakoba and for the first time since we started making golf picks here at Dimers, we are set to have ZERO representation on the weekend.

There's still a few players yet finish off their second rounds, but our picks in Koepka, Fowler and Higgs all had poor Fridays.

Now, before we get into it, if you’re ready to put your big-boy pants on and join one of the many new online sportsbooks that are desperate for your business, you can claim the best Welcome Offer available to you by tapping on your state here: PA  NJ  IN  CO  IL

🏌️‍♂️ Round 3:
Picks and Plays

With some players yet to finish their second rounds, we are unable to place bets on day three matchups.

This means that today our suggested play is to take Justin Thomas outright at +2000 or 20/1.

He couldn't quite get his putts to drop on Friday but the way he was striking his irons shows just how close he is to a ridiculous score on a gettable course.

If JT can come out and smash out a 64 or so, his odds will slash and the 20/1 bets will be laughing!

🏌️‍♂️ Round 2:
Picks and Plays

It's our last chance for the year to hit another massive matchups parlay and you don't want to miss out on day two! As always, we head to DraftKings to take on their head-to-head matchup markets. If you're not sure of the benefits of these matchup parlays, check out this ridiculous win a bettor had recently!

Remember, these head-to-head matchups are just for Friday's action so we're ideally going to be cashing a big ticket come the end of the working week.

The Mayakoba Classic sees a host of stars return to action before the Holidays with Justin Thomas and Brooks Koepka the highlights of the field.

Masters champions Dustin Johnson was also pencilled in to compete this week but withdrew on the weekend, citing his “mind and body telling [him] it's time for a break.”

Onto the guys who are joining Brooks and JT, with Tony Finau, Abe Ancer and Daniel Berger just some of the guys keen to secure some early points for the 2021 FedEx Cup.

Last year’s winner, Brendon Todd, also suits up this week but will face a tougher field than he did in November 2019.

Looking ahead to our picks for the week now, we’ve once again gone with three outright winner plays, and will have our daily matchup parlays as we head into all four days!

The four-time major winner absolutely dominated the sport between 2017 and 2019 but hasn't won a tournament now since June of last year, when he took out the WGC-FedEx St. Jude Invitational, finishing three strokes ahead of the field.

Despite always claiming that the majors are the only thing he cares about, he's as determined as anyone once he gets on the course and won't want to go a full calendar year without a victory, injury-affected or not.

If you need a reminder of just what he can do in non-major events, check out these ridiculous highlights from 2018-19 ⏬

Before we get into our other picks for this week, we simply have to share this offer with you:

PointsBet is offering up a massive chance for bettors to make some cash this weekend, boosting JT from -130 to +100 to finish in the Top-10! Join PointsBet here and get an extra $100 in free bets when you deposit $50! 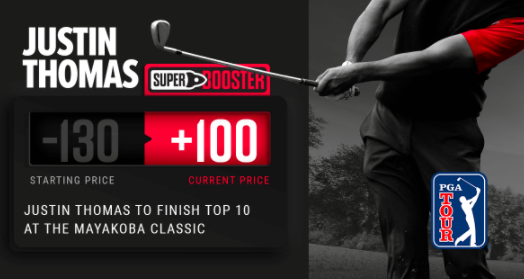 Since bursting onto the scene a decade ago and controversially winning the 2010 PGA Rookie of the Year over now four-time major winner Rory McIlroy, Rickie Fowler has experienced his fair share of ups and downs.

Right now, we find him in a potential down moment, with qualification for the 2021 Masters Tournament no guarantee. But Rickie is a super talented (and proud) dude and won't be giving up on that easily.

As it stands, he sits 49th in the Official World Golf Rankings, with a top-50 placing come the end of the calendar year, cementing his place in the prestigious first major of the season.

At 28/1 and in need of a big performance, Rickie is our value bet of the week. And although it may seem like he has been off for a while, here's a highlights package from his win in Phoenix just last year ⏬

One of the most likeable dudes on the Tour, Harry Higgs is a great follow on social media and also a great guy to root for when coming down the stretch on a Sunday.

Yet to break through for his first PGA Tour win, Higgs won on the PGA Tour Latinoamérica in 2018 and the Korn Ferry Tour in 2019, showing he has the mettle to lock down a dub.

He never plays a round without his shades on, even when the sun starts to set, but based on this shot here, it doesn't seem to have a negative impact on his game!

As you can see, our dark horse picks have been pumping out great results (all have at least made the cut) and should always be played for Top-20 and Top-10 finishes, as well as sprinkling some pizza money on them to win outright!

🏌️‍♂️ Round 1:
Picks and Plays

It's our last chance for the year to hit another massive matchups parlay and you don't want to miss out on day one! As always, we head to DraftKings to take on their head-to-head matchup markets. If you're not sure of the benefits of these matchup parlays, check out this ridiculous win a bettor had recently!

Remember, these head-to-head matchups are just for Thursday's action so we're ideally going to be cashing a big ticket come the end of day one.