The Match is back with four legends of sports coming together to raise money for charity in what should be a chirpy clash between dudes who aren't afraid of some occasional trash talking.

One side of the ledger has 5-time major winner Phil Mickelson paired up with NBA legend Charles Barkley, who despite possessing a let's say interesting golf swing (see below), says he is a new and improved golfer, but who knows with Chuck! Suppose we will find out by the first tee.

The other team features two greats of their respective sports, with Steph Curry and Peyton Manning pairing up. But not only are these guys legends of the NBA and NFL, they're also both handy golfers, with Curry playing off scratch and Manning possessing a 4.8 handicap.

So, you're probably wondering who is going to come out on top, but first we need to get into how exactly this is going to work.

Format of The Match III

Each hole will see both players from each team whit tee shots, and then swap balls for their approach shots (e.g. Mickelson will hit Barkley’s second shot and vice versa). Following the second shot, the teams will decide between which ball they want to play for their third.

Compare sportsbooks in your state

Phil has absolutely launching his drives of late and will be confident that he can set up Chuck with a reasonable second shot on most holes, but there's every chance that Steph and Peyton can get at least one of their balls quite close to where they want it with their combined abilities.

Betting on The Match III

FanDuel sportsbook have installed Curry and Manning as quite short favorites and that seems to be the way most people are leaning. The gap between Phil and the two guys on the other team though should be quite large, meaning that if Chuck can play the occasional decent shot, we should be in for a close one!

Suggested bet: Take Mickelson and Barkley to win and ride them home with Phil destroying the ball off the tee and Chuck showing off his 'new and improved' game!

Looking to fade this pick and go with Steph and Peyton? This is the offer for you! Sign up to PointsBet here with the promo code DIMERS to receive an extra $100 in bet credits when making an initial $50 deposit! 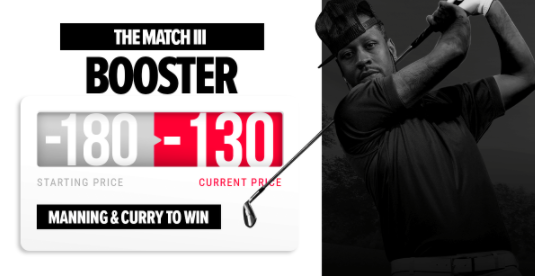