Props & Hops joins the Dimers Podcast Network this week. Check it out for weekly wagers distilled from the best football gambling podcasts, plus original analysis and the best in beer. Here’s an overview of the Week 11 highlights.

Friday marked another wild day in a wild NFL season. In the morning it was announced that Myles Garrett had tested positive for COVID-19 and would therefore miss Cleveland’s home game against Philadelphia, but that was only the top story for a hot minute until reports surfaced that Sean Payton had opted to go with Taysom Hill under center over Jameis Winston for New Orleans when Atlanta comes to town on Sunday.

In a season full of games coming on and off the board at a moment’s notice due to test results, it was refreshing that Friday’s bombshell out of New Orleans was non-COVID-related and that it opened a window of betting opportunity.

Recognizing the perplexing nature of Payton’s decision, the vultures circled quickly around the Falcons and plucked most of the meat off the bone, but there appears to be a smidge of value remaining on the Falcons for those willing to invest in them for a reduced amount. Expensive +3.5 lines are out there along with cheap +3s, and anything at +3.5 up to -120 or +3 at even money or better is worth a small “go.”

On the Matchbook and Deep Dive podcasts, Drew Dinsick (well known as @Whale_Capper on Twitter) said he thinks the Saints’ QB change sees its biggest downgrade this week as the team assimilates to a new signal-caller in the wake of Drew Brees’s injury. Drew Dinsick, as well as TA of the Sharp Angles podcast, had noted earlier in the week that we might see more Hill than usual without Brees and that would be good for Atlanta backers - this was under the reasonable assumption that Winston would be starting, so the former part of the equation is certainly true - we’re bound for a whole lot of Hill on Sunday in the Superdome. Whether the heavier dose of Hill is good for Falcons backers remains to be seen, but the market’s response indicates that’s the case as well.

On the other side of the ball, Drew and TA noted the Falcons likely get Calvin Ridley back at WR, which should only further bolster an offense that’s shown strong recent form.

Another key factor for Drew: The lookahead of Saints -7 seemed high, so knocking that down a couple points and downgrading the Saints by a couple more points for the move from Brees to Winston made his fair line -3. With an additional downgrade from Winston to Hill, anything at a cheap +3 or better would appear to present value on the Falcons.

TA said he liked Atlanta down to +3.5 against Winston, so he would also seem to like the Falcons at the current number against Hill. He noted New Orleans got very fortunate to cover against the 49ers last week, turning two muffed punts into 14 points, and that the Saints’ stout rush defense may force Atlanta to make more optimal play calling decisions and air it out - a sentiment shared by Dave Essler, who made the Falcons his best bet on the Dream Preview.

Steve Fezzik also made Atlanta his best bet on the Dream Preview, saying their 3-6 record is misleading based on brutal outcomes in close games, a point bolstered by Essler’s note that the Falcons’ point differential for the season is only -8, much more in line with a team hovering around .500. Fezzik only made the Saints 1.5 points better than Atlanta with Winston at QB, so it stands to reason he sees a smaller gap, if any, between the teams with Hill under center for the Saints.

All in all, when arguably the most efficient betting market in the world reacts swiftly and firmly against you, you probably made a bad decision. Payton gets the element of surprise by announcing Hill as his starter, but that may not be nearly enough to account for the downgrade in true talent.

If the Falcons cover the number they’ll be in the hunt for the outright win, so consider a small piece of the money line at +150 or better to go along with the ATS wager.

Drew also took the lead on this handicap, saying he likes the Under down to 44.5. When Denver has the ball, Drew Lock is bad and will be banged-up if he plays. If Lock can’t go, backup Brett Rypien doesn’t pose much of a threat to the Under against a good Dolphins defense. On the other side of the ball, there’s uncertainty around Tua Tagovailoa making his first start on the road in the elements at elevation.

Fezzik added that Miami has scored five fluky touchdowns in three games with Tua, including three defensive/special teams scores and two one-yard TD drives set up by the defense and special teams. This has contributed to a misleading picture of the Dolphins’ scoring output under Tua.

I’ll add for good measure that the Dolphins have also benefited from fluky breaks while on offense under Tua. In last week’s win over the Chargers, LB Denzel Perryman dropped an easy first-half interception; Miami maintained possession and scored a TD. Then in the second half, Chargers LB Kyle Wilson had a pass go between his hands and into the arms of a Dolphins receiver for a 19-yard completion in the red zone, setting up a Miami field goal.

So in all three phases, the Dolphins have been benefiting from unsustainable luck that’s inflating their scoring output. Natural regression combined with a paltry Broncos offense should result in a low total in the Mile High City on Sunday.

This teaser fits the classic Stanford Wong model, crossing through the key numbers of 3 and 7.

In the first leg, Houston was favored on the lookahead line - New England deserves an upgrade for its impressive showing in a Sunday Night win over the Ravens, but the Patriots as a clear favorite seems to mark an overreaction.

In the second leg, Green Bay seems undervalued coming off a close win over a bad opponent last week in the Jaguars. That win came in poor conditions that won’t be a factor indoors in this contest, setting the stage for a big performance from Aaron Rodgers against the Colts’ soft zone scheme. Indianapolis’s defense has put up impressive numbers so far this season, but Rodgers & Co. will mark a significant step up in class.

We’ve seen tons of scoring this season - the lack of fans has enabled road teams to communicate seamlessly, refs all but stopped calling offensive holding, and coaches have started to realize that passing can be more optimal than rushing and going for it on fourth down can be more optimal than kicking - and that resulted in a lot of Over bets cashing in the early going. The totals market is quick to become efficient so blindly betting Overs isn’t advisable, but farther down the menu some pricing still appears to be behind the curve. In games with high totals, the “shortest TD” prop appears to be one of those mispriced options.

Often available in the range of -150 on Sunday mornings, the true price for this prop for a game lined at 51 ½ should be closer to -165. A one-yard TD might sound like a long shot in any given game, but there are a lot of ways for it to get home - see above re: increased scoring, plus the possibility of pass interference in the end zone. Sticking with the basic math, more scoring inherently increases the odds of more TDs, and more TDs increases the odds of more one-yard TDs.

From a matchup standpoint, the Packers have a strong ground game led by Aaron Jones and Rodgers has shown an uncanny ability to pass for 1-yard scores this season. On the other side, Frank Reich has consistently made optimal fourth-down decisions for the Colts, giving them a slight edge to finish a drive with a short touchdown when another coach otherwise would’ve punted or settled for a chip-shot field goal.

Few things pair better with betting than beer, and this week the spotlight goes on West Coast IPA is Dead by Green Cheek Beer Company in Orange, Calif.

As the name implies, West Coast IPA is Dead is a West Coast IPA. It clocks in at 7.2% with a clear, golden yellow appearance and a fluffy white head. 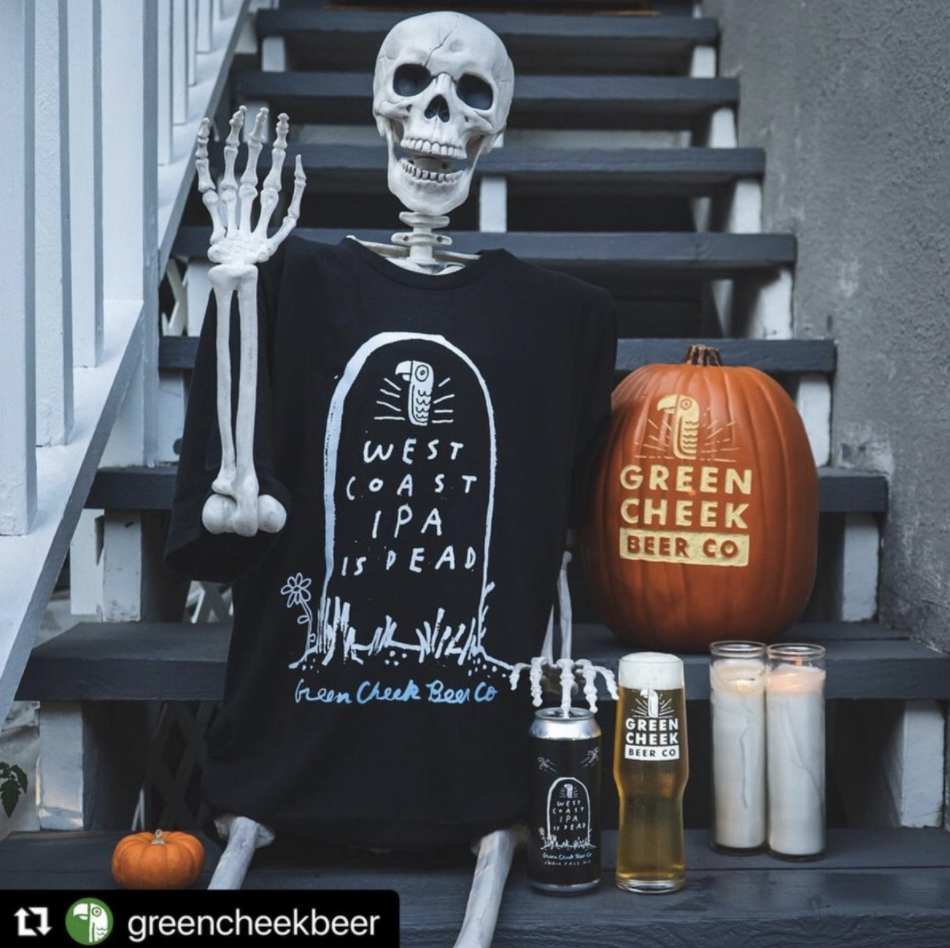 The Citra and Simcoe hops shine through on the aroma and flavor: citrus, tropical and resinous notes up front, giving way to bitterness and a crisp, light finish.

If you’re in California, keep an eye out for beer shipping options from Green Cheek’s online beer store - one of the silver linings of the pandemic has been greater access to world-class beer delivered right to your door, with Green Cheek factoring firmly into that equation. The brewery typically announces new beers and statewide shipping options via Instagram on Saturday mornings.