Preview: College Football No. 7 Miami Florida at No. 1 Clemson

‍Of all the things that Houston transfer D’Eriq King will bring to Clemson, it’s not the rocket arm, the quick feet, or even the 43.3 points-per-game average that will matter most Saturday night. It will be the proverbial smelling salts to a sleepy team, and the full unbridled attention of the ACC’s back-to-back-to-back-to-back-to-back Champion Tigers.

Since Deshaun Watson lifted Clemson to newfound heights within the College Football pantheon, and handed off the reins to future no. 1 pick Trevor Lawrence, the ACC has been putrid. That’s not hyperbole, it’s just the fact of the mediocrity that Dabo Swinney has lorded over.

The U is the first ranked speed bump in Clemson’s way to cement themselves as a College Football Playoff team, and that no. 7 next to their name brings out a different Tiger team than the one that looked good, but not great, against Wake Forest and Virginia. It’s extremely hard for teams, especially in college, to just “turn it on” when the lights are brightest, but Clemson has somehow been able to accomplish this with consistency over the last handful of seasons.

An early sign that Clemson has its mojo, and if you’re enjoying some big time football and looking to take advantage of live odds, will be the room tailback Travis Etienne has to run between the tackles, and how many plays get him involved in the passing game (a telltale big game sign like last year against Ohio State and LSU). On the opposite side of the ball, watch for whether the talented Clemson defensive line can pinch King within the pocket, rather than letting him escape. AND if there are stunts or slants up front, does Defensive Coordinator Brent Venables bring linebacker or safety attention to coral him? Swinney has out-recruited and out-developed all teams outside of Tuscaloosa, AL and Columbus, OH; and that’s something a transfer QB can’t remedy.

So while the summation here is narrative central, we’re using Dimers analytical data to give us an edge into the current -14 line for Clemson, and a 56% chance to cover for Clemson.

You can take full advantage of Clemson -14 with boosted odds of +110 with PointsBet. (IL & NJ only) 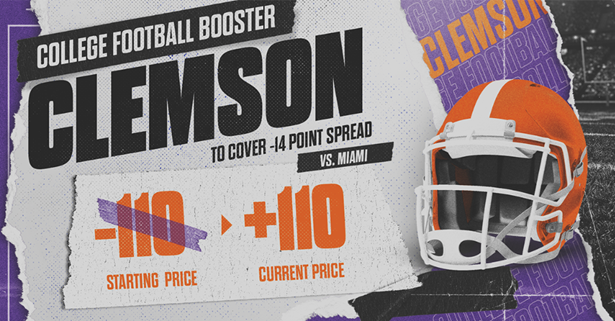